A Trusting Boss is a Successful Boss

Distrust - The Hidden Cost of Control 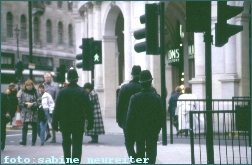 Everyone only does as much as they absolutely have to,' is a key tenet of Economics. However, a new study by the University of Bonn proves the exact opposite: most people do more than they have to - unless they are being supervised. If they are, motivation and efficiency nosedive.

'Homo economicus' is a sluggard. He simply lets any work pile up if he needn't fear any repercussions or financial losses. Management therefore need to keep an eye on him if they want to see results. This at least is a basic tenet of Economics.
Yet things are different in reality - and very much so, if we are to believe a new study of the problem. In it the team headed by the Bonn economist Professor Armin Falk concludes that supervision can have devastating effects on motivation and efficiency.

Prof. Falk is a professor at the University of Bonn and the research director at the Institute for the Study of Labor (IZA); the German financial weekly WirtschaftsWoche calls him one of the most influential economists in Germany. Together with his colleague Dr. Michael Kosfeld from the University of Zurich he investigated, in a simple experiment, how people react to supervision.
144 Swiss students took part in the experiment. The researchers then split the group up into game pairs consisting of two players, a 'boss' and an 'employee'. At the beginning of the game the employee got 120 points in a virtual account, while the boss had to make do with 0 points.

The employee could then invest some of the points - this amount corresponded, so to speak, to the work done. The boss's account was credited with twice the amount invested by the employee as his 'earnings'. However, beforehand the boss was allowed to decide whether he wanted to give his employee a completely free hand or whether he wanted to 'dictate' a minimum workload of 10 points so as not to go completely empty-handed. The amount in the account could later be turned into hard cash - those taking part were given 20 centimes per point.

A selfish 'homo economicus' ought, according to the prevailing theory, to always pay the minimum - i.e. 0 points if the 'boss' gave him a free hand, and otherwise 10 points. The boss would thus always do better if he kept his employee under supervision. 'However, surprisingly enough, the amounts the employees invested dropped as soon as the boss started to supervise them,' Prof. Falk explains. The difference was quite considerable: only 32 per cent of all those taking part gave 10 points or less if they were not supervised. However, if the boss fixed 10 points as the minimum, more than half gave exactly this minimum amount. On average the 'supervised' employees only gave 17.5 points. If they had a free choice, this amount was a third higher, although every point cost them real money.

After the game a lot of the participants stated that they had interpreted the insistence on a minimum amount by their boss as a lack of trust,' Prof. Falk adds. 'And why should I do more for somebody than is absolutely necessary if they do not trust me?' On the other hand the bosses who opted for supervision admitted that they had fixed the minimum amount because they were afraid that they would otherwise go away empty-handed. 'The game shows the traits of a self-fulfilling prophecy, ' is how Prof. Falk summarises the results: 'Anyone who is suspicious of the willingness to work of their employees is in fact punished by poor work levels; whoever is optimistic and gives them free rein is rewarded.'

However, the study also showed that under strict supervision the work levels rose: for example, if the boss fixed the minimum amount at 20, on average he received exactly as many points as when he gave his employees a completely free hand. 'If there has to be supervision, it should be done properly,' Prof. Falk concludes. 'Otherwise the negative effects predominate.'

How realistic the game results are is shown by an observation made by David Packard, co-founder of the computer firm HP. In the 1930s he was working for the US company General Electric. Tools and parts were well guarded to ensure that the employees did not steal anything. In his memoirs Packard shows how effective this was. 'Faced with this obvious display of distrust, many employees set out to prove that it was justified, walking off with tools and parts whenever they could.'